Review: The Girl in the Painting, by Tea Cooper (with giveaway)

The Girl in the Painting
by Tea Cooper

A young prodigy in need of family. A painting that shatters a woman’s peace. And a decades-old mystery demanding to be solved.

Orphan Jane Piper is nine years old when philanthropist siblings Michael and Elizabeth Quinn take her into their home to further her schooling. The Quinns are no strangers to hardship— having arrived in Australia as penniless immigrants, they now care for others as lost as they once were.

Despite Jane’s mysterious past, her remarkable aptitude for mathematics takes her far over the next seven years, and her relationship with Elizabeth and Michael flourishes as she plays an increasingly prominent part in their business.

But when Elizabeth reacts in terror to an exhibition at the local gallery, Jane realizes no one knows Elizabeth after all—not even Elizabeth herself. As the past and the present converge and Elizabeth’s grasp on reality loosens, Jane sets out to unravel Elizabeth’s story before it is too late.

From the gritty reality of the Australian goldfields to the grand institutions of Sydney, this compelling novel takes us on a mystery across continents and decades as both women finally discover a place to call home.

“Deeply researched. Emotional. Atmospheric and alive. . . Tea Cooper transports the reader to a sweeping landscape of turn of the twentieth century Australia—from the raw realities of the Australian goldfields to the sophisticated institutions of Sydney—and does so with an expert pen. Combining characters that are wonderfully complex with a story spanning decades of their lives, The Girl in the Painting is a triumph of family, faith, and long-awaited forgiveness. I was swept away!” —Kristy Cambron, award-winning author of The Paris Dressmaker and the Hidden Masterpiece novels

Although I received an electronic copy of this book from the publisher and Historical Fiction Virtual Book Tours, the opinions in this review are my own.

Thomas Nelson has released another of Australian author Tea Cooper’s historical novels, and I’m happy they’ve done so. The Girl in the Painting is the second book by her that I’ve read and I’m now a firm fan! It’s a split time novel, with Michael and Elizabeth’s story in the late 1800s in one track and Jane’s storyline in 1913 the focus of the second. Cooper has expertly crafted a story of many layers, with each layer peeled back until all is revealed at the end. (I guessed Michael’s secret only shortly before it was revealed in the narrative.) Woven into the narrative are a couple of historical events, including a piece of British history I didn’t know about, and looks at issues such as anti-Irish and anti-Chinese sentiment. (Apparently the Irish saw the Chinese as “different,” despite both cultures being victims of discrimination.) There’s also a strong take on how men treated women, whether it be as protectors to them or deciding that a woman was only as good as the property she brought into a marriage.

The Girl in the Painting kept me up long past my bedtime, because I had to know how it ended. As far as I’m concerned, it’s another five-star read by Tea Cooper. (I gave the same to The Girl in the Green Dress.) Although I’ve now only read two books written by her, I’m now a firm fan of Cooper’s and I look forward to reading more by her. I’m delighted Thomas Nelson will be releasing Cooper’s books in the USA, and I’m excited to see the publisher will release another of her books later in the year. 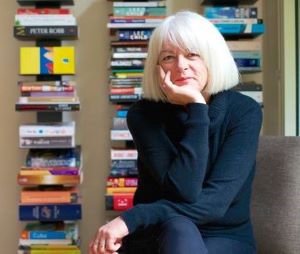 Tea is an award-winning Australian author of historical fiction. In a past life she was a teacher, a journalist, and a farmer. These days she haunts museums and indulges her passion for storytelling. She is the bestselling author of several novels, including The Horse Thief, The Cedar Cutter, The Currency Lass, The Naturalist’s Daughter, The Woman in the Green Dress, and The Girl in the Painting.

Tuesday, March 16
Review at Bibliostatic
Excerpt at The Caffeinated Bibliophile

Friday, March 19
Review at The Lit Bitch
Review at View from the Birdhouse

Saturday, March 20
Review at Nursebookie
Review at Reading is My Remedy

Saturday, March 27
Excerpt at Passages to the Past

Enter to win a paperback copy of The Girl in the Painting by Tea Cooper!

The giveaway is open to the US only and ends on March 31st. You must be 18 or older to enter.

The Girl in the Painting Giveaway 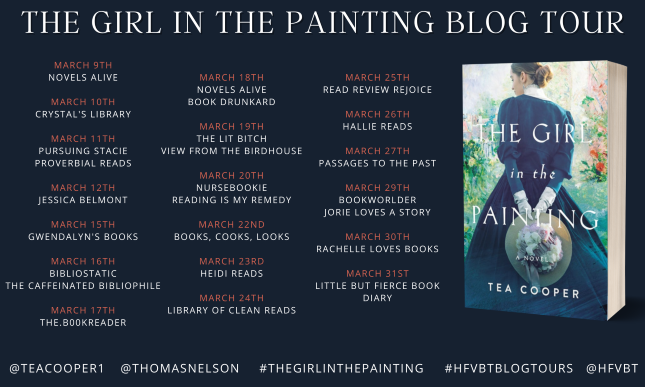