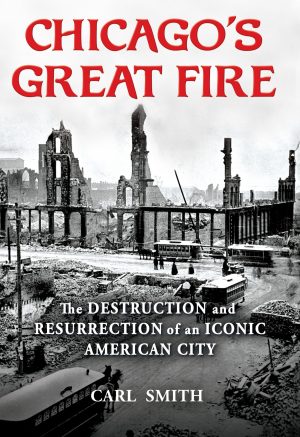 Between October 8–10, 1871, much of the city of Chicago was destroyed by one of the most legendary urban fires in history. Incorporated as a city in 1837, Chicago had grown at a breathtaking pace in barely three decades, from just over 4,000 in 1840 to greater than 330,000 at the time of the fire. Built hastily, the city was largely made of wood. Once it began in the barn of Catherine and Patrick O’Leary, the Fire quickly grew out of control, twice jumping branches of the Chicago River on its relentless northeastward path through the city’s three divisions. Close to one of every three Chicago residents was left homeless and more were instantly unemployed, though the death toll was miraculously low.

Remarkably, no carefully researched popular history of the Great Chicago Fire has been written until now, despite it being one of the most cataclysmic disasters in US history. Building the story around memorable characters, both known to history and unknown, including the likes of General Philip Sheridan and Robert Todd Lincoln, eminent Chicago historian Carl Smith chronicles the city’s rapid growth and place in America’s post-Civil War expansion. The dramatic story of the fire—revealing human nature in all its guises—became one of equally remarkable renewal, as Chicago quickly rose back up from the ashes thanks to local determination and the world’s generosity and faith in Chicago’s future.

As we approach the fire’s 150th anniversary, Carl Smith’s compelling narrative at last gives this epic event its full and proper place in our national chronicle.

Disclaimer: Although I received a copy of the Uncorrected Proof of this book from the publisher via NetGalley, the words and opinions below are my own.

Don’t ask how I developed an interest in Chicago, its Great Fire, and the later World’s Fair, because I won’t have an answer for you. I’ve not even been to Chicago unless you count being at O’Hare Airport for flight transfers. I’ve only seen downtown from the air. It might’ve been the story of an infamous murderer doing his deeds during the 1893 World’s Fair that got me started. From there, I would’ve looked at the event, and then back to the Great Fire 22 years earlier. The Fair was a way to promote Chicago’s grandeur and rebuilding after the fire. It was a phoenix, rising from the ashes. The preface from this recent release about the fire goes as far as stating that, with hindsight, it was a good thing that the city burned.

From that interesting beginning, we then get a brief look at Chicago’s history and the reasons for its growth. As they say in the real estate market, “Location, location, location!” Westward expansion and the improvement of the railroad system meant that Chicago was ideally placed. It was almost a straight shot from New York City, and its proximity to Lake Michigan was also an advantage. Migrants flocked to the city from not only within the United States, but also from countries such as Ireland, Italy, and Poland. The result was a heavy mix of poor and wealthy, along with equally varied constructs of living accommodation. It probably isn’t a surprise that the fire began in one of the poorer parts of the city.

But Chicago’s Great Fire isn’t only a historical guide to the event. Yes, we get a narrative of when the fire started, how the authorities were (or in some cases weren’t) notified of its spread, and how long it lasted. We also get descriptions of the people fleeing, how they took care of their belongings, who went where to escape, and how the citizens looked to recover. Northwestern University Professor Carl Smith makes use of maps, photographs, and lithographs, as well as journal entries and newspaper reports. He analyzes the various relief efforts, looking at how they were organized and the criteria by which they went when releasing funds and other, non-monetary, forms of assistance. We see how the telegraph enabled word of the disaster to spread around the world. Communities in other states and countries sent charitable contributions as a result. There is an extensive look at the rebuilding of the city, and an analysis of how the fire contributed to a migration of wealthier Chicagoans from the city center to newer suburbs. Lastly, there is a section on the much-maligned Catherine O’Leary. Did her cow really kick over a lantern, or was it merely a scapegoat?

When the phrase “great fire” is mentioned to me, my mind immediately turns to the Great Fire of London in 1666. Having read this book, I now feel I know more about the fire of Chicago than of the one in the city of my birth. Professor Smith’s book is a great resource and I found it easy to read. When I finally get to visit the Windy City, this is a book I would consider purchasing and having on my shelf as a reference to this historic event.

I'm all about books, history, rail trails, craft beer and wine, and dogs! I'm a Partner with Trades of Hope: my paid job empowers women around the world out of poverty, helping them raise their families, and rebuild their lives after abuse and human trafficking.
View all posts by Sally M →
This entry was posted in Uncategorized and tagged American History, book review, Gilded Age, historical events, non fiction. Bookmark the permalink.