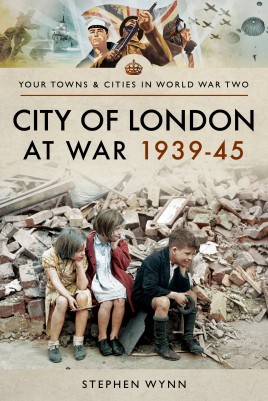 The City of London was always going to be an obvious target for German bombers during the Second World War. What better way for Nazi Germany to spread fear and panic amongst the British people than by attacking their capital city? Although not vastly populated in the same way that a bigger city or larger town would be, there were still enough people working there during the day for attacks on it to take their toll. The city’s ancient and iconic buildings also bore the brunt of the German bombs, including churches designed by Sir Christopher Wren after the Great Fire in 1666.

The book looks at the effects of war on the City of London, including the damage caused by the 8 months of the Blitz between September 1940 and May 1941. The most devastating of the raids took place on 29 December 1940, with both incendiary and explosive bombs causing a firestorm so intense it was known as the Second Great Fire of London.

It also looks at the bravery of the staff at St Bart’s Hospital, which was one of the medical facilities that remained open during the course of the war. Other stories include the sterling work carried out by the City’s civilian population and the different voluntary roles that they performed to help keep the city safe, including the Home Guard and the Fire Watchers, who spent their nights on the city’s rooftops looking out for incendiary devices dropped by the German Luftwaffe.

Despite the damage to its buildings and its population, by the end of the war the City of London was able to rise, like a phoenix, from the flames of destruction, ready to become the vibrant and flourishing borough that it is today.

Disclaimer: Although I received an electronic copy of this book from the publisher via Netgalley, the words and opinions below are my own.

When I’m asked where I’m from, I usually reply, “London.” It’s a place almost everyone has heard of, unlike the actual towns where I spent my first nine years. Truthfully, I lived in Sutton and Kingston. These are towns in the county of Surrey, and both are London boroughs. My paternal grandparents were also born in south London, in the boroughs of Southwark and Lambeth. When I think of London, the urban sprawl both sides of the River Thames comes to mind. So, it’s no wonder I had a moment of confusing London with the City of London when I first saw this book title. The City of London is the square mile north of the river, the business district, and the ancient city established by the Romans. This is the area author Stephen Wynn focuses on in the latest in the “Your Towns and Cities in World War Two” series put out by British publisher Pen and Sword.

This is the first time I’d read one of these titles, so I wasn’t sure of the format. Would it be in depth or mostly pictorial? What I got was a journal of sorts, a chronological telling of war-related events from 1939 to 1945. Subjects vary and jump around. In one paragraph I read about the last execution at the Tower of London (not actually part of the City), and the next paragraph was about the creation of a war time hospital. Global events such as the Warsaw Ghetto Uprising are also included. Occasionally, the author includes subjective observations on subjects such as guest lists for formal luncheons. There are some amazing photographs, ones that translate very clearly into the Kindle format I read. I only wish there were more.

Yes, there are negatives to the book. I was disappointed to see the author reference Wikipedia at one point. I wish the electronic copy clearly separated quotes from the author’s words. There isn’t a detailed notes/bibliography, so I couldn’t go to the source for more detail on particular events. If the Warsaw Ghetto Uprising is included, why aren’t war time events in Greater London also mentioned? The author acknowledges that the Tower of London isn’t in the City of London, so why does it merit an entire chapter? The author states it’s because most people would associate it with the City, but I’d say – with a personal bias – that many London boroughs such as Southwark might also be associated in the same fashion. I’d have also been interested in daily life for those who did live in the City. How was rationing, for example? Were there fines for not having blackout curtains? Were local pubs still open? How much was a pint of beer?

Okay, so what’s good about City of London at War? I’ve already mentioned the clarity of the photographs. I like that it’s broken down by year, and in chronological order. It’s a good resource for any “On This Day” feature, although the lack of bibliography doesn’t help. I learned the sort of tasks my great uncle would have done as a member of the Air Raid Precautions Service, and it was good to see that women had important roles in the Civil Defence Service as well.

The most poignant parts of the book, however, are the lists of the dead. Not every casualty from the Blitz is noted, but those who died at or near underground stations due to German bombing are included. We get their names, ages, where they lived, and who they left behind. Towards the end of the book, the author provides the same information for all those who with London connections who gave their lives fighting for our freedoms in Europe, Asia, and the Pacific. We owe them a great debt, and this is a nice gesture for the families.

So maybe I didn’t get much of an insight into the lives of my south London family members during World War Two. This is still an interesting overview, and a good beginning point. Now that I’m familiar with the series and know what to expect, I’d like to see the title about Tynemouth and the upcoming book about South Shields because I had family members who did live and work in those areas during the war.

Stephen is a retired police officer having served with Essex Police as a constable for thirty years between 1983 and 2013. He is married to Tanya and has two sons, Luke and Ross, and a daughter, Aimee. His sons served five tours of Afghanistan between 2008 and 2013 and both were injured. This led to the publication of his first book, Two Sons in a Warzone – Afghanistan: The True Story of a Father’s Conflict, published in October 2010. Both Stephen’s grandfathers served in and survived the First World War, one with the Royal Irish Rifles, the other in the Mercantile Marine, whilst his father was a member of the Royal Army Ordnance Corps during the Second World War.

When not writing Stephen can be found walking his for German Shepherd dogs with his wife Tanya, at some unearthly time of the morning, when most normal people are still fast asleep.