“You want me to tell of how I broke the world.”

It’s the year 641 since humanity was formed in Eden, and after Eve passes away, Adam is the only man left on earth who remembers everything from the beginning of the world.

When Enoch, God’s newly appointed prophet, decides to collect the stories of the faithful from previous generations, he finds Adam in desperate need to confess the dark secrets he’s held onto for too long.

Beside a slowly burning bonfire in the dead of night, Adam tells his story in searing detail. From the beginning of everything, to how he broke the world, shattered Eve’s heart, and watched his family crumble.

Will Enoch uncover what led so many of Adam’s children away from God? And will Adam find the redemption and forgiveness he longs for?

“I think we’ll be hearing more of Brennan and his stories.” – Charles Martin, NYT best-selling author

“How do you take a centuries-old story and put a new spin on it, inviting readers into an evocative world they thought they already knew? Brennan McPherson figured out the way. Flood will entertain you, yes, but also take you deep into your soul and make you ponder both the vastness and the intimacy of God.” – James L. Rubart, Christy Book of the Year award-winning author of The Five Times I Met Myself

Due to the praise given Eden from some of my favorite Christian authors, I jumped at the opportunity to review a different type of Biblical fiction. I’m used to reading novels about the women who appeared in both testaments; I seldom read about a man. I’m fairly certain there has been at least one title about Eve, although I’ve not read it.

I’m usually reluctant to review self-published works. While it’s a popular path to take, I often find errors and inconsistencies that might’ve been eradicated with a bit of research and another set of eyes. I mean, if I can find errors after hitting publish on a simple blog post… But McPherson acknowledges that Eden hadn’t been proof-read before it was published in his introduction, and he encourages readers to communicate with him if they believe there are errors.

Honestly? There were times I didn’t like this book. Eve irritated me with her petulance. There seemed to be a lot of “let’s blame the woman,” going on, when Adam wasn’t entirely innocent. And, my goodness, did they both have mood swings or what?

But, let me tell you about the symbolism. Much of Eden has a New Testament perspective to it, something I also got from McPherson’s end notes about Genesis 1-4. The main theme is sacrifice, of red staining a tunic that was originally as white as snow. There’s a prophecy of the one who would come to make atonement for humanity’s sin. What’s marginally confusing is that not all of God’s words in the narrative come from the book of Genesis. It’s the New Testament perspective that’s possibly putting words in His mouth, and I wouldn’t want to presume His thoughts and words on anything. One message I did take away, however, is the danger of choosing earthly things – including relationships and wanting to please others – over God.

If I didn’t think I cared much for Eden while reading it why, then, am I giving it a full five stars? Well, I only give five stars to books that have me reaching for the Kleenex. I’m that hard of a reviewer. But… something happened in the final pages of Eden. Adam came to the end of his story, and I was overwhelmed with emotion. I wish I could tell you what happened but that would be a massive spoiler, but all I can say is that there was hope and redemption. Those last paragraphs packed an emotional punch, and the tears rolled down my cheeks. And no, those weren’t tears of relief and joy because I had actually finished the book. Instead, they were the tears that could only come from something profound that reached deep into my heart. Happy reading, people!

Disclaimer: I received a copy of Eden from Historical Fiction Virtual Book Tours but these are all my own thoughts. 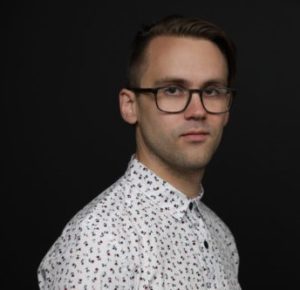 Saturday, April 11
Feature at What Is That Book About
Interview at Passages to the Past

Sunday, April 12
Review at Tales from the Book Dragon

To celebrate the publication of Eden, Brennan is offering a paperback copy of every book published by McPherson Publishing (with the exception of EDEN), including the 3 Psalm Series novella books, one by Mesu Andrews, one by Carole Towriss, one by him; a copy of FLOOD: The Story of Noah and the Family Who Raised Him and BABEL: The Story of the Tower and the Rebellion of Man; and a non-fiction book The Simple Gospel and How it Works in Us.

– Giveaway ends at 11:59 pm EST on April 16th. You must be 18 or older to enter.
– Paperback giveaway is open to US only.
– Only one entry per household.
– All giveaway entrants agree to be honest and not cheat the systems; any suspicion of fraud will be decided upon by blog/site owner and the sponsor, and entrants may be disqualified at our discretion.
– The winner has 48 hours to claim prize or a new winner is chosen. 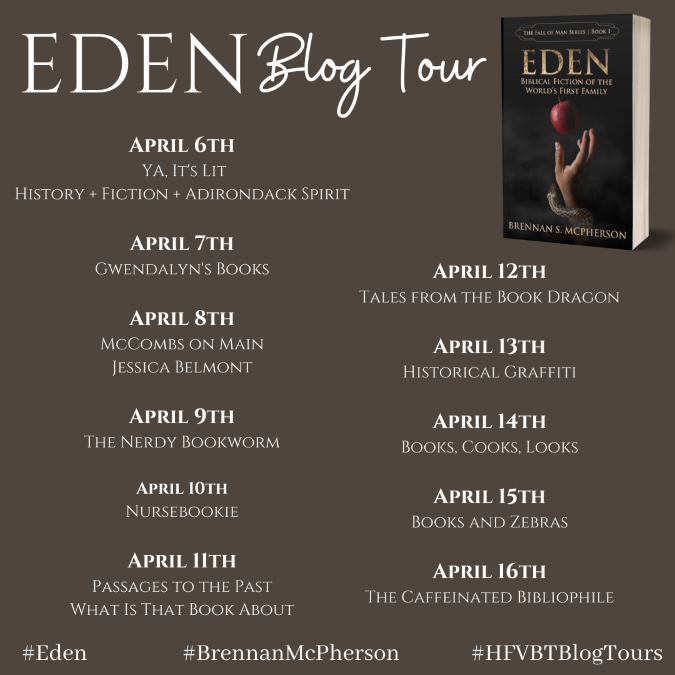