While it might not seem an obvious addition to a bucket list, Chicago is one of the many locations on mine. (Along with the likes of ancient Petra, in Jordan!) This Midwest city contains a wealth of history, and several events I find fascinating took place there. There’s the H.H. Holmes murders, the Columbian Exposition (World’s Fair) of 1893, and… the Great Chicago Fire. As I read Veiled in Smoke, by Jocelyn Green, I would pause to find a spot on a map, such as where the fictional Corner Books & More store would’ve been located (corner of Randolph and Clark Streets, diagonally across from Court House Square. 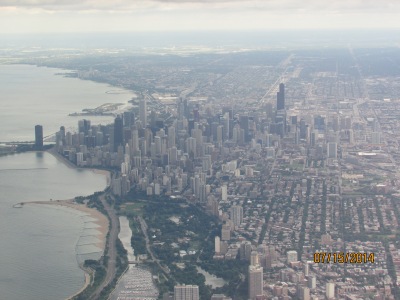 The only Chicago location I’ve been to is O’Hare Airport, twice. The closest I’ve been to downtown is probably from up in the air. This photograph shows Lincoln Park in the lower half. Interestingly, part of it was once a cemetery. I wouldn’t be surprised if there are still a few bodies buried under there. During the Great Chicago Fire, people escaping the flames fled to Lincoln Park. In Veiled in Smoke, the Townsend sisters and Nate Pierce were among those running for safety. 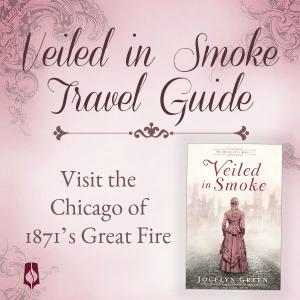 Jocelyn Green recently wrote a blog post about places in the city where you can catch glimpses of the city as it was in the book. First on her list is the former O’Leary property where the fire started. It’s now the location of the Chicago Fire Academy. You know that had to be intentional but, nonetheless, I find it funny. Another place on her list is a mansion from one of my favorite eras of American history – the Gilded Age.

I'm all about books, history, rail trails, craft beer and wine, and dogs! I'm a Partner with Trades of Hope: my paid job empowers women around the world out of poverty, helping them raise their families, and rebuild their lives after abuse and human trafficking. We can change the world. We can be each other's neighbor.
View all posts by Sally M →
This entry was posted in Uncategorized and tagged American History, Gilded Age, historical locations, Illinois, literary locations. Bookmark the permalink.