The Spice King, by Elizabeth Camden 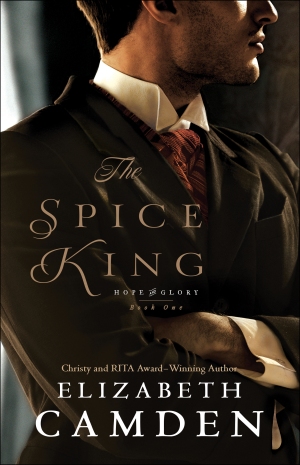 Disclaimer: I purchased an electronic copy of this book. I was not required to write a review, and the words below are my own.

“For what shall it profit a man, if he shall gain the whole world, and lose his own soul?”

This quote from the Gospel of Mark is what came to mind as I sat down to write this review. Gray Delacroix is a man of means. In the aftermath of the Civil War, his father – a Virginia businessman who had lost everything after the state joined the Confederacy – started over and built an empire around the importation of various spices. Gray and his siblings inherited the business when Mr. Delacroix died, but it’s Gray who has taken on the lion’s share of running it. His younger brother, Luke, meanwhile has seemingly frittered away his life and his inheritance, and is now in a precarious situation. When a rival looks set to capture the spice market, Gray looks set to lose both his family and the business he and his father worked so hard to create. And that’s when Annabelle Larkin arrives; a woman whose goal is to work with Gray’s other enemy: the same Federal Government that confiscated his father’s original holdings.

Knowing what’s in a food product is considered important in today’s western culture. We are informed by various experts about what we should and shouldn’t be putting into our bodies. But did you know that this isn’t anything new? The new Hope and Glory trilogy is set in the run up to the passage of Pure Food and Drug Act of 1906. Delacroix is a position to take down his business rival because he knows the man is adulterating ingredients such as vanilla. Now, call me silly but I’d never really thought about where vanilla flavoring came from. Yes, I knew it came from a pod but I had I had no idea that it came from a flowering plant, especially an orchid! Elizabeth Camden’s novels are full of hidden gems of information such as this, but they’re skillfully woven into the narrative. This is a historical romance, but the emphasis is on the history part which is why I enjoy her books so much.

This is the first of three novels about the Delacroix siblings. At the end of The Spice King there’s an excerpt of the middle book, which apparently focuses on the other sibling. This means we’ll have to wait until the final title for the resolution of Luke’s story. I don’t want to spoil anything, but I’m sure I wasn’t the only reader frustrated by the lack of a conclusion where Luke is concerned. So that means I’ll have to keep reading the trilogy. This, in all honesty, won’t be much of a hardship if Camden continues her brilliant standard of writing.

Author Q and A