Review: Fate of the Redeemed, by Chad Pettit

Welcome to the Blog + Review Tour & Giveaway for Fate of the Redeemed by Chad Pettit, hosted by JustRead Publicity Tours!

An angel with amnesia. A demon with a vendetta. The man caught in their crossfire.

Lester Sharp has been given a second chance to live a life of compassion, but his decision to follow God will be tested when his estranged father calls to tell him his brother has been killed in combat. A demon unleashes a series of attacks on him, and someone he thought was lost to his past emerges.

Lester is guarded by the angel, Draven, but when Morane catches the watcher off his guard, Draven loses his memory and finds himself being held prisoner in a remote Somali village. His only ally is Ibrahim, a man who finds out his son has been murdered by extremists when his granddaughter appears out of nowhere and somehow possesses supernatural powers.

As Morane’s fury is unleashed, time is running out for Lester, and Draven’s fate is in the hands of a man whose faith is being pushed to the limit.

While Lester fights for his life—and for his soul—will he make the right choices, or will he decide—once and for all—that he doesn’t need God? And why is one man so important in the midst of spiritual warfare?

Disclaimer: I received an electronic copy of this book. The words and opinions below are my own.

Approximately 10 months ago, I had the honor of reviewing a novella by the name of Fate of the Watchman. I described it as a variation of A Christmas Carol, with an ordinary man shown the harsh reality of the world while the clock stayed stuck at 12 midnight. I also wondered what would happen next for this man and for the being that had been his guide…

The full length follow up, Fate of the Redeemed, provides the answer to my question. In the immediate days after Lester’s return to faith he is severely tested a la Job. Everything that could go wrong does go wrong. And he’s haunted by a man with dark eyes, whom no one else can see. His guide, Draven, is nowhere to be found, except he’s now in one of the harshest areas of Africa and facing true evil. And, yes, this is a book about the battle of good and evil that goes on all around us even though we can’t always see it. Will Draven recover? Will Lester keep his new found faith? It all comes to a fiery climax that I described in my notes as “Luke Skywalker versus the Emperor – and then some!” Although now I think about it, it’s probably more like Luke versus Vader in Empire Strikes Back. Because I’m certain there’s more to come.

Do you need to read Fate of the Watchman first? Absolutely! There’s also a prequel, available through Chad Pettit’s website, called Angel of Fate. Fate of the Redeemed ends on a cliffhanger with more questions I find myself asking, especially since I’ve read that prequel. Let’s just say certain elements are introduced in this book that should not be left hanging. So I’m hopeful that the final chapter is yet to come. And when it does, I shall read all the parts at once and enjoy the tremendous buildup of tension as the series hurtles to a finale. Of course, as a Christian, I already know how this battle of good versus evil will end in real life. I just want to see how Pettit will end it for his characters.

Chad Pettit grew up lost in the world of fantasy fiction but alienated from a knowledge of God. With no real direction in his life, he shipped out for basic training twelve days after high school. He continued down a path of sin and destruction through two combat tours to Iraq, but then God pulled back the blinders, and he met his Lord and Savior. One passion that never left him was his love for fiction, and in 2013 he went back to school and earned his degree in English. This helped him develop his craft, spending long hours pounding away at the keys until his battles with guilt, fear, and shame came alive on the page. 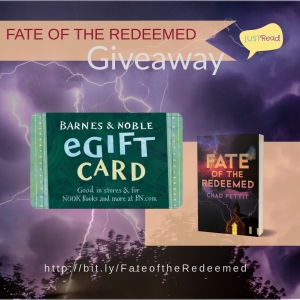 Be sure to check out each stop on the tour for more chances to win. Full tour schedule shown below. Giveaway will begin at midnight October 16, 2019 and last through 11:59 PM EST on October 23, 2019. US only. Winner will be notified within 2 weeks of close of the giveaway and given 48 hours to respond or risk forfeiture of prize.

Giveaway is subject to the policies found here.