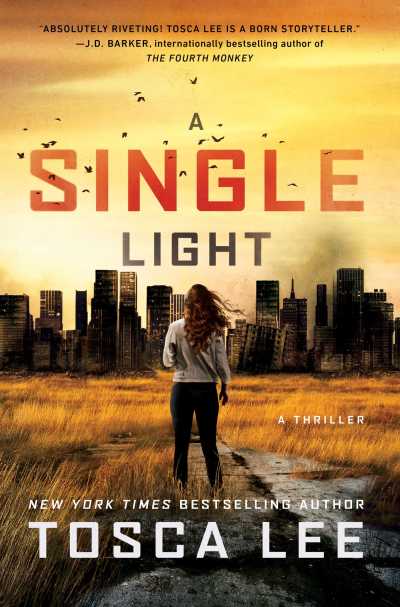 Welcome to the sequel to The Line Between. It’ll be an exhilarating ride!

Back in January, I had the opportunity to read and review the latest novel by Tosca Lee. I absolutely loved it, but there was one problem: I wanted to know the rest of the story, because I knew there had to be more. Was the world going to end or not? What a relief to learn there would be a sequel!

If you’ve not read The Line Between previously, you need to. A Single Light starts approximately 14 days after the events of the earlier novel. Lee presumes the reader is familiar with that book because there is little backstory included in the narrative. Given that it had been several months since I’d read A Single Light, I opted to re-read the final pages to refresh my memory.

What can I say that isn’t a spoiler? The first quarter of the book takes place in an underground silo where Wynter and her fellow prisoners (?) must survive for six months. There’s plenty of tension as emotions simmer and eventually boil over. With so many different personalities there’s bound to be trouble, and Wynter is unsure who she can really trust.

The rest of the plot takes place after the door to the bunker opens. If you’ve seen The Walking Dead, you’ll find plenty of common elements. There are the infected, the quarantined, ravaged communities, and communities controlled by groups with their own agendas. It’s a dog eat dog world, kill or be killed, and Wynter must navigate all of it. The reader stays with Wynter throughout; you’ll know everything she knows and nothing that she doesn’t.

When you read A Single Light, you’ll smile, you’ll gasp, you’ll cry, and you’ll question. Maybe like me, you’ll feast on it in one sitting. Maybe you’ll be like me and be completely blindsided by the ending.

Tosca Lee has written a variety of novels. Two have been optioned for television. She’s written novels based on Biblical characters such as Eve and Judas Iscariot, but her books don’t tend to fit into the Christian fiction category. Still, there was one line near the end that struck me. At first, I wasn’t sure what it meant and why it got to me like it did. But it stayed with me, and I thought about it, and I loved it even more. Yes, I read an advance copy. But I hope to goodness it stays in the finished product because it’s that good.

“I realize that every time I ever met God, I was nowhere safe.”

Disclaimer: I received an electronic Advance, Corrected Reader’s Proof of this book from the publisher and author. I was not required to write a review, and the words above are my own.

I'm all about books, history, rail trails, craft beer and wine, and dogs! I'm a Partner with Trades of Hope: my paid job empowers women around the world out of poverty, helping them raise their families, and rebuild their lives after abuse and human trafficking.
View all posts by Sally M →
This entry was posted in Uncategorized and tagged American fiction, book review, books, contemporary fiction, fiction, thriller. Bookmark the permalink.

2 Responses to Review: A Single Light, by Tosca Lee