Opinion: This Labor Day, Consider the Global Cost of Labor

One of the deadliest industrial disasters in the USA took place in 1911. It killed 146 workers. One hundred and two years later, a building collapse in Bangladesh caused almost 10 times that number of deaths. Why haven’t lessons been learned, and how can we help change things?

Many years ago, I worked in the office of manufacturing company. Once a month, we had to attend safety briefings. Much of the information didn’t apply to me. I would never need to know about the lock-out/tag-out process, for example. But I did have to keep a log of every single safety incident, whether it was employee carelessness or a roof fire caused by an outside contractor. And I had to be able to produce that log on demand should the government contracted inspectors ask for it. Steel-toe shoes? I wore them. I actually still have my pair. Safety glasses and earplugs? I distributed them. 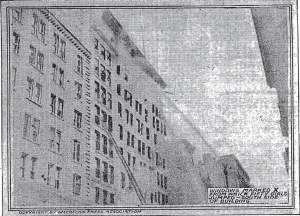 Many of the deceased jumped from the windows, in a desperate attempt to escape the inferno

The safety aspects of my office job were part of the legacy of the Triangle Shirtwaist Factory Fire, which took place in New York City in 1911. The victims were mostly women, mostly foreigners. Their working conditions were anything but safe and, furthermore, the workers were locked in during working hours. Company owners and managers claimed that it was to defer employee theft. The two owners were acquitted of manslaughter. Two years later, one of them was again arrested for locking the doors during work hours. He was fined $20, the minimum fine possible. Still, there was enough of an outcry that activists and politicians began lobbying for new laws concerning working conditions. There are now huge penalties in the USA for breaking these labor laws, and there are ways for employees and laborers to report unsafe working conditions. 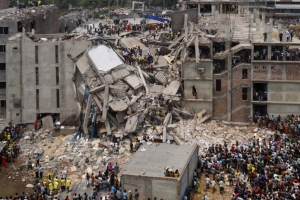 What was left of the Rana Plaza building after its collapse

Sadly, this isn’t the situation globally. In April 2013, the Rana Plaza building collapsed and caused 0ver 1100 deaths. Just as in the NYC fire, the victims were garment workers. They were involved in the making of clothes for European and North American brands. Bangladesh has one of the lowest rates of pay. In 2018, the minimum wage was 32 cents an hour. It’s no wonder that, in order to keep costs low, companies have their products made in countries with such low wages. The problem is the lack of safety enforcement. After the Rana Plaza disaster, some clothing companies did attempt to institute changes. Accords were signed, and inspection offices started. But it sounds as though the Bangladesh government hasn’t exactly been on board. You see, instituting changes in safety requires money, and around 10 percent of Bangladesh’s parliament own garment factories. It’s understandable why they wouldn’t want to vote for anything that would cost them money.

That doesn’t mean you should immediately stop buying any product with a label stating “Made in Bangladesh.” After all, some companies in the country have made safety improvements. There are also plenty of other manufacturers in other countries that operate sweat-shops, employ workers for pennies (or even nothing!), and generally put profits over people. We turn the proverbial blind eye to it because we like to get more for less. Case in point, back in the 1990s I was ecstatic that I bought a brand new shirt from Wal-Mart for less than $2. It sounds normal to many people now but, at the time, I lived in Scotland and you just couldn’t get anything that cheap from a named store. These days, I now look at items priced that low and think, “How much are they paying their workers?” And I won’t lie; it’s taken a long time to change my way of thinking.

Of course, it’s helped that I now work for a member of the Fair Trade Federation. Through my job selling Trades of Hope* fashion accessories and home décor, I’ve become more aware of the problems associated with labor and global manufacturing. Now, I want to know why we won’t allow the conditions that caused the Triangle Shirtwaist Factory Fire in the USA, but we’ll (subconsciously maybe) allow them to exist in other countries. What makes a life in Bangladesh, Vietnam, Cambodia, China, and other far off countries apparently less valuable than one in the USA? Chances are, you’ll say that’s not the case at all. You’ll probably be very defensive and I don’t blame you. But every time we buy something for a price we consider ‘cheap’ that’s what we’re actually doing.

I could, at this point, turn this into a sales pitch. But, instead, on this Labor Day, I just want you to ask yourself the questions above. as I am asking of myself. Maybe you’ll justify your buying choices because you can’t afford to pay more. Maybe you’ll stop buying as much of a product (which can lead to a whole other conversation about recycling and landfills). Maybe you’ll argue that earning 32 cents an hour is better than nothing and that these workers should be thankful to have a job. Maybe you’ll decide to only buy products from brands that are fair trade certified or made in the USA. I’ll leave the decision up to you. All I ask is that you ask.

The Worst Day I Ever Saw

Why Won’t We Learn from the Survivors of the Rana Plaza Disaster?

I'm all about books, history, rail trails, craft beer and wine, and dogs! I'm a Partner with Trades of Hope: my paid job empowers women around the world out of poverty, helping them raise their families, and rebuild their lives after abuse and human trafficking.
View all posts by Sally M →
This entry was posted in Uncategorized and tagged Fair Trade, history, opinion. Bookmark the permalink.