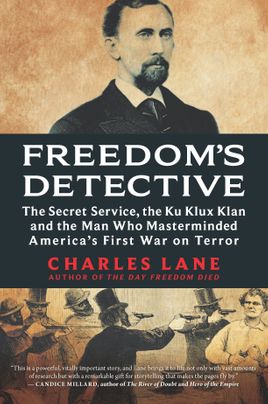 Who was Hiram C. Whitley, second Chief of the United States Secret Service and the man who broke up KKK during the Reconstruction era? In this easy to understand narrative, journalist Charles Lane describes an enigma of a man who didn’t exactly play by the rules. Despite being known as a pivotal figure in the fight against the Klan, Whitley had previously betrayed abolitionists on the Underground Railroad. Did the man have a change of heart regarding slavery and the plight of the freedman, or was he an opportunist?

I knew nothing about Whitley before picking up this book, but I feel I know something now. I can’t say I know a lot, but that’s due to the man’s complexities rather than Lane’s writing. Anyone who shuts down the Klan and stops their heinous activities should, theoretically, be one of the good guys. But Whitley doesn’t often come across as one. In some ways, he was ahead of his time when it came to detective work. But did “Freedom’s Detective” spend too much time curtailing civil liberties? Would his methods, as Lane describes, be able to withstand the court cases that would surely be brought against him today?

Freedom’s Detective is a comprehensive look at just one aspect of the troubled President Grant administration. It comes complete with graphics, notes, and an extensive bibliography. If you thought the Pinkertons were the main detectives during and after the Civil War, or that the Secret Service was mostly about protecting government officials, then this is an entertaining and enlightening work. It’s definitely worth a read.