Non-fiction Review: Bringing Down the Colonel, by Patricia Miller 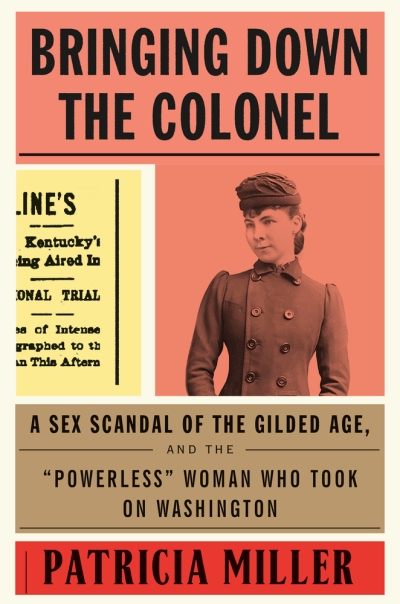 Over a century before the onset of #metoo, a previously unknown woman brought a breach of marriage suit against a powerful Washington politician. This was no small thing since she would be required to reveal her status as a “fallen woman.” Nevertheless, she took him to court in 1893, won the trial in 1894, ended his career the same year, and was consigned to the footnotes of history. Long before the likes of Harvey Weinstein graced the tabloids with accounts of disgusting behavior, Patricia Miller had heard of Madeline Pollard and begun investigating her case against one William Campbell Preston “Willie” Breckinridge.

A married man having a mistress is nothing new. In fact, the higher up in society you were the more it was almost expected of you. Both wife and mistress were kept handsomely and each had a role to play in the man’s life. But society also had unwritten rules regarding the situation: the wife should never acknowledge – or have to confront – her husband’s infidelities, and the mistress should never publicly reveal her position as Madeline Pollard did.

Miller’s book doesn’t just look at the trial and surrounding media accounts. She includes a brief history of marriage and pre-marital sex in America, and why Pollard’s case was so groundbreaking. She also looks at the sad case of Maria Halpin, who found herself pregnant with Grover Cleveland’s child after, she alleged, he raped her. Cleveland went on to be President while Halpin’s reputation was smeared forever. Cleveland was elected in 1884 and 1892. He was Breckinridge’s contemporary, in more ways than one. The final third of the book looks at Breckinridge’s re-election campaign and how women’s attitudes were changing as a result of the trial. Breckinridge lost the election due to the voices of a populace who couldn’t even vote.

Patricia Miller took ten years to research and write Bringing Down the Colonel. The result is an in-depth, yet easy to read, accounting of the scandal and how opinions on sexual relations outside of marriage and women’s rights have changed since colonial times. Are there difficulties? Yes, but they aren’t Miller’s fault. There were a large number of players involved – from legal advisors to society doyennes – and a Who’s Who might’ve been a nice addition. The involvement of Jane “Jennie” Tucker sounds almost made up – until I found independent proof that she did actually exist – but she provides an interesting counterpoint to the women who sided with Pollard. She was hired by Breckinridge’s supporters to spy for his legal team, but never received payment for her work. The actions of Breckinridge and his cronies show that when it comes to treatment of women, there is nothing new under the sun.