I’ve wanted to read a Fiona Davis book since reading the premise of The Address, her second (and previous) book. The idea of a time slip novel set around The Dakota intrigued me, especially when combined with a fictional murder mystery. I’ve still not read it, but I grabbed the opportunity to apply for a review copy of The Masterpiece when I saw it on NetGalley. This was another time slip novel, set at a famous historical location, with a mystery thrown in. 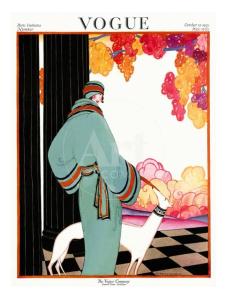 A Helen Dryden Vogue cover. Dryden was the inspiration for Davis’ character, Clara

I have a habit of looking up almost anything that appears in an historical novel. This time, it meant looking into Grand Central Terminal and the Grand Central School of Art. Because one of the main characters – Clara – was an illustrator, I was drawn to the name of Helen Dryden, who was one of the school’s instructors and an illustrator. While I’d not heard of Dryden previously, it’s evident throughout the book that Davis used Dryden as inspiration for the character. Nowhere is this more apparent than the descriptions of Clara working with the car manufacturer Studebaker. The author’s note at the end also cited fellow art school instructor, Arshile Gorky, as inspiration for another character.

Although Clara and Virginia’s stories are set almost 50 years apart, there are commonalities. Both women struggle for independence in a male-dominated world. Both experience the fall from wealth to near poverty. They, and Virginia’s daughter, are on a path to finding their self-worth. Ironically, Virginia’s daughter favors photography, a medium Clara feels might make obsolete her talent for illustration.

Since the fate of one character was revealed halfway through, I thought I knew what was coming. The narrative seemed to chug on to that destination like the 20th Century Limited train so frequently mentioned. It expertly wove the two lives and time periods until they finally came together with a twist that had me saying, “Wow!” Once I finished The Masterpiece, I wanted to go back to find the clues I’d so obviously missed. The plot, the characterization, and the detail, all made me fall in love with this book. And now I want even more to read The Address! If you’re looking for a great historical novel with strong, yet fallible, characters, I can’t recommend The Masterpiece enough.

I'm all about books, history, rail trails, craft beer and wine, and dogs! I'm a Partner with Trades of Hope: my paid job empowers women around the world out of poverty, helping them raise their families, and rebuild their lives after abuse and human trafficking.
View all posts by Sally M →
This entry was posted in Uncategorized and tagged American fiction, book review, books, fiction, historical fiction, historical locations, time slip fiction. Bookmark the permalink.

1 Response to Fiction Review: The Masterpiece, by Fiona Davis