What Would Mrs. Astor Do? A Review of the Upcoming Book by Cecelia Tichi

The Gilded Age has fascinated me for years. It’s a contradictory mix of outer beauty and inner ugliness. The homes that survive (for many have not) are examples of opulence. The “cottages” that were built as summer homes in Rhode Island and Georgia are more like miniature palaces. But the women could be petty, spiteful, and downright nasty. One need only hear the story of the rivalry between THE Mrs. Astor and Alva Vanderbilt for proof of that. Today, we tend to look at the era in disgust, even as we complain the divide between rich and poor has never been greater. The men who gave us steel, electricity, and trains are described in negative terms by people who now take these innovations for granted. They are the “robber barons” who took advantage of the poor, despite their philanthropic efforts. Where would many of us be without a Carnegie library?

But these men, who often came up from nothing (see Andrew Carnegie’s birthplace in Scotland), would not have been favorites of Caroline “Lina” Astor. Although, just like the Astors, they had their New York mansions and Rhode Island cottages they were considered the nouveau riche. They didn’t have the impeccable manners and lineage on which Mrs. Astor insisted. She was definitely one of the biggest snobs that ever existed, and yet she was the one the women emulated if they wanted even the slightest chance of getting on the exclusive social calendar.

What Would Mrs. Astor Do? is not wholly about this magnificent lady. It’s about the customs and unwritten rules of polite society, while describing some of the indulgences and excesses of which members of that said society partook. We read of the fancy yachts and the appearances at social events. Homes were built, extended, and redecorated on a whim when a matron determined that her rival’s home was better than hers. Whoever thought only men were cutthroat never met a Gilded Age housewife. And yet, despite the fact that these women were legally the property of their husbands and that they often had to turn a blind eye to their spouse’s infidelities, the wives of the Gilded Age ruled everything that was not connected to business. They’d plan the balls and the nights at the opera, and spent their husband’s riches freely. They used credit long before we carried little rectangles of plastic in our wallets. 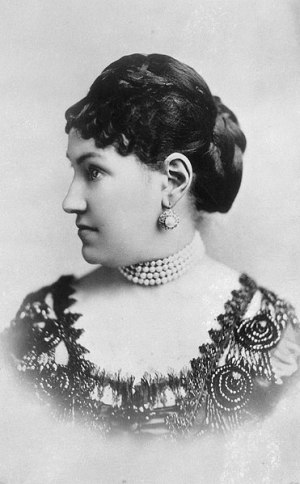 While some of the desired rules now seem pedantic and tedious (a woman had to change clothes several times a day depending on her activities, for example), I often found myself wishing that some forms of Gilded Age etiquette were still observed. Oh to receive a prompt reply to an event invitation. And it would be quite nice for a gentleman to take the section of the sidewalk closest to the road. With the exception of the horrendous tale of Evelyn Nesbit, most society women were treated with the utmost respect and propriety. A husband and wife might not love each other – that often wasn’t the reason for marriage – but, by and large, they knew where they stood with each other. Apparently, Mrs. Astor never had a bad word to say about her husband and he never brought embarrassment to her by flaunting his mistress.

Cecelia Tichi utilizes plenty of sources for her work. We have excerpts from that known doyenne of manners, Emily Post. Newspapers of the time described the extravagances of the midnight balls. The novelist, Edith Wharton, was related through her father to Mrs. Astor, and Tichi quotes her works – particularly The House of Mirth – since she wrote from experience. Other social commentators and diarists are also quoted such as May King Rensselaer, Elizabeth Lehr, and Daisy Hurst Harriman. Finally, there is an extensive bibliography and also a list of photography credits.

The last section is on death and, in particular, the death of Lina Astor. Even then, certain etiquette had to be observed. Who knew, for example, that you couldn’t even attend a funeral unless you were invited? I’m willing to bet that ol’ Mrs. Astor even had her social list ready for the eventuality and members of the nouveau riche were definitely persona non grata to that event.

I'm all about books, history, rail trails, craft beer and wine, and dogs! I'm a Partner with Trades of Hope: my paid job empowers women around the world out of poverty, helping them raise their families, and rebuild their lives after abuse and human trafficking. We can change the world. We can be each other's neighbor.
View all posts by Sally M →
This entry was posted in Uncategorized and tagged American History, book review, books, culture, Gilded Age, history, non fiction. Bookmark the permalink.