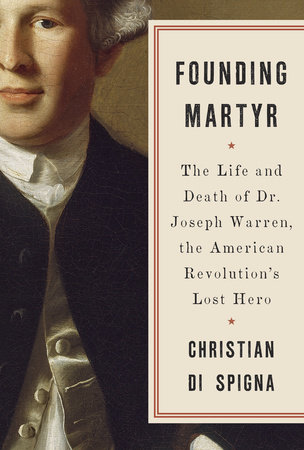 My husband’s home county is named for him, but who was Doctor Joseph Warren? His untimely death at the Battle of Bunker Hill (and a year before the Declaration of Independence) means his place in history has been largely overlooked. His name is seldom mentioned in the same breath as Adams and Washington, but is it possible that events such as the Boston Tea Party and Paul Revere’s legendary midnight ride might not have happened if not for Warren? Speaker and Colonial Williamsburg volunteer, Christian di Spigna, has set about writing a complete biography about the life and times of the medic and agitator.

Di Spigna is not the first to write a so-called definitive biography of Warren, but his is the first I’ve read on the man. He starts with a look at Warren’s childhood in Roxbury, Mass., and gives an idea of what the doctor’s childhood was probably like. Roxbury then is different to how it is now. At the time, Roxbury was separated from Boston by a narrow isthmus, and that little fact is actually fairly important. The Boston Neck, as it was known, was the main way in and out of Boston by land. It was via this route that Revere and William Dawes traveled when Warren sent them out on that ride.

Warren’s death has ensured that, when he is considered, he is looked at in a mostly positive light. But in my reading of Founding Martyr I don’t believe he comes across as a stellar individual. It’s true that one man’s terrorist is another’s freedom fighter, so maybe my English background is subconsciously telling me something. Di Spigna includes examples of Warren’s incendiary writing in which, albeit anonymously, Warren appeared to encourage mob activities such as the infamous Tea Party. The mob violence reminded me of today’s Antifa movement, although that doesn’t automatically put either group on the right side of history. Personally, I deplore any form of wanton destruction (which seems to go against the Founding Fathers’ notions of property rights), and the author shows that both patriots and loyalists committed such acts. 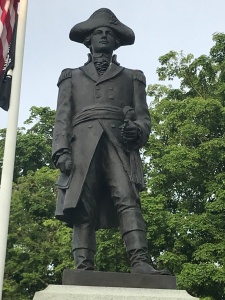 Statue of Gen. Joseph Warren, in Warren, Pennsylvania. This is the only known statue of Warren outside Boston, Mass.

So who was Warren? Was he someone who tried to straddle the fence, with both patriots and loyalists for patients, only to eventually fall onto the side of Revolution? Did he keep his patriot clients in order to spy on them? Or did he simply not care what others thought and did his own thing? Through this book, I came to see him as an impetuous creature who had to be involved in everything and go wherever the action was. It makes no sense to me why, with his many civilian and organizational roles, he had to go rushing off to the physical fight. It also appears he wasn’t accustomed to thinking long-term. For example, he handed his motherless offspring into the care of his fiancée, who adored them, but left no written statement regarding their situation should he pass. This left the lady with no legal recourse when his family claimed the children. Warren supposedly made a comment about dying up to his knees “in blood,” but was this a man who truly thought about his death or merely wanted to sound noble?

Almost everything I know now about Joseph Warren comes from 313 pages of Founding Martyr. Overall, it’s a fascinating read about a complex man. From what I can tell, Di Spigna does a thorough job of examination, quoting other biographers in his discourse, and finishing with a discussion of Warren’s legacy. There are over 70 pages of notes, some of which are more than mere references to other sources. It’s a concise, mostly easy to read, introduction to a man who is possibly more responsible for the Revolutionary War than is commonly thought. I’m not sure I would call him a hero, but then heroes are mostly mere mortals who do uncommon things in uncommon times. And Warren was definitely a mortal living in uncommon times.

One final thought: I find it richly ironic that this book is published by Crown, when a crown was worn by the man Joseph Warren thought to remove from the oversight of colonial affairs (George III)

I received a download of Founding Martyr from First to Read, a Penguin Random House program. My words and opinions are my own.

I'm all about books, history, rail trails, craft beer and wine, and dogs! I'm a Partner with Trades of Hope: my paid job empowers women around the world out of poverty, helping them raise their families, and rebuild their lives after abuse and human trafficking.
View all posts by Sally M →
This entry was posted in Uncategorized and tagged American Revolution, book review, books, history, non fiction. Bookmark the permalink.